This is an extremely diverse juice with the balance of the sweet aromatic Cox's Orange Pippin and the drier, slightly sharp Bramley. Rich enough to be reduced for sauces and sharp enough to stand tall in a cocktail.

The definitive English cooking apple. Discovered as a chance seedling in the 19th century, Bramley's Seedling rapidly became the most widely-grown cooking apple in the UK - popular with both commercial growers and gardeners. It cooks down to a puree, with a good flavour. 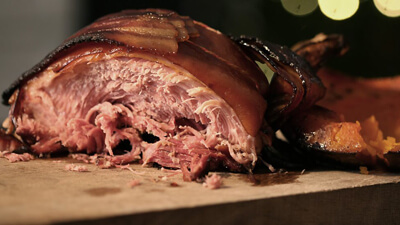 Preparation method
Preheat the oven to 200C/400F/Gas 6.
In a bowl, mix together the treacle and maple syrup. Add the bacon and leave to marinade for at least four hours.
To a large pot, add the Maynard House Bramley apple juice, onion studded with the cloves, the bay, star anise and peppercorns. Finally place the gammon joint in the liquid and simmer with a lid on for 1 hour and 30 minutes.
Meanwhile cut the pumpkin half in half again.
Place the pumpkin on an oven dish, skin-side down, and trickle olive oil over. Season with salt and freshly ground black pepper, add a knob of butter in each pumpkin slice and bake in the oven for 45 minutes. When cooked set aside under foil to keep warm.
When the gammon has cooked, remove from the liquid, place on a baking tray, and then layer the treacle bacon over the top.
Bake for a further 15 minutes, or until the bacon is crisp.
Carve the gammon and serve with scoops of soft pumpkin flesh.

Mulled apple juice from
The BBC
A non-alcoholic alternative to mulled wine, ideal for entertaining kids and drivers

Keep me informed about Maynard House

We won't give your details away to any third party and will send a maximium of one newsletter per quarter. see our privacy policy